Oil is an important part of running any kind of engine these days, and regularly changing your lawn mower.oil is important low-level maintenance you should do regularly.

After all, not all motor oil is created equally, and there is a reason your lawn mower manufacturer suggests a specific type.

The viscosity of your oil can have a huge impact on your engines, and using the wrong weight motor oil for your climate may damage the motor or engine beyond repair.

While it more than likely wouldn’t immediately cause your engine to blow up or otherwise stop working, using the wrong kind of oil long-term could cause significant amounts of wear and may result in needing to replace your lawn mower much more quickly.

Can I put Car Oil in a Lawn Mower?

The small engines found on lawn mowers and other outdoor equipment are typically air cooled, while the engines in cars are liquid cooled.

The liquid cooled engine of a car is typically “cleaner” in the sense it isn’t exposed to the elements as directly and has a filter to clean out contaminants that could be introduced.

The air cooled engine found in a lawn mower, on the other hand, is exposed to the elements far more frequently, has no filter in place, and don’t see as much regular maintenance as car engines do.

That said, you probably wouldn’t notice any kind of noticeable difference between using 10W40 oil or another kind of engine oil instead of SAE 30 or another oil for lawn mower instead.

So, if you have some spare 10W40 oil or another kind of motor oil laying around from the last time you topped off the oil in your car, you could use it in your lawn mower. 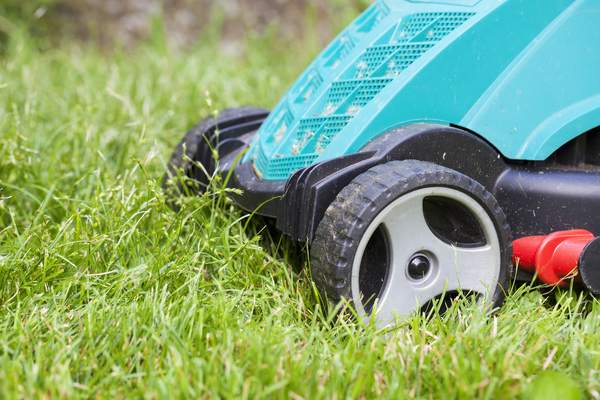 You absolutely can! It’s usually a better idea to go with SAE 30 or the lawn mower oil recommended by the lawn mower’s manufacturer, but it more than likely won’t be an issue if you use 10W 40 oil instead.

The reason lawn mower manufacturers recommend SAE 30 is due to the oil’s viscosity. When used, it lasts longer than 10W40 oil since it’s a single weight oil, where 10W40 is a multi-weight oil that will break down more quickly.

One reason to get lawn mower motor oil is that while lawnmower oil is far more expensive than standard engine oil, you get what you pay for when you use it; it lasts longer, saving you more money in the long-term and saving your lawn mower engine from any potential damage that could come up from using the wrong oil.

Much like 10W 40 oil, you can absolutely use 5W 40 oil in your lawn mower. Unlike 10W 40 however, 5W 40 oil would be better in colder areas, as it maintains the same viscosity as 10W 40 at colder temperatures and flows better.

This means that when it’s cold, 5W 40 wouldn’t take as long to warm up and become less viscous, which in turn decreases your chances of damaging your engine.

If you aren’t running your lawn mower in really cold temperatures however, there’s no noticeable difference between using 5W 40 oil instead of 10W 40 or SAE 30.

10W 40 and 5W 40 are just meant for warmer climates, so as long as you aren’t mowing the lawn in temperatures below -30 Celsius (-22 Fahrenheit) you’ll probably be okay.

When it comes to warmer temperatures, 10W 40 and 5W 40 are meant for warmer engines, so they won’t reach the same viscosity as SAE 30, 10W 30 or 5W 30. This could cause issues as the engine has to operate with less lubrication, since the oil won’t be as liquid, meaning it won’t flow as smoothly.

This could cause more wear and tear on the engine since it has to work the same amount with less oil to lubricate things. One possible issue that comes from issues with the oil is cold engine wear.

10W 30 runs slightly more viscous during colder months, so it’s better suited to use in more average climates. While it may be able to run at the same temperatures as SAE 30, it is thicker at those temperatures, so it could lead to slightly more wear on your engines over time.

That said, it shouldn’t cause immediate and significant damage if used instead of SAE 30.

Like 5W 30 (covered below) you can use 10W 30 oil in your lawn mower and see no issues. Using the wrong kind of oil can accelerate the amount of wear on your engine.

Using the wrong viscosity oil may not have any effects on your engine, but the wrong one being used consistently will cause lasting damage and increased wear and tear on your engine.

The primary difference is what the oil viscosity becomes as it cools. It will return to 5W as it cools, where SAE 30 stays at 30W all the time.

They provide the same protection and do the same thing at the high heat of the engine when it’s running though, so the two oils do basically the same job. The difference is how viscous it gets at cooler temperatures.

5W 30 is the most similar to SAE 30 despite being a multi-weight oil, and this shows in its performance range while operating at temperature. It cools to a thinner viscosity at cooler temperatures, so it can’t hurt your engine to use when compared to SAE 30, which stays the same no matter the temperature.

While that probably isn’t a significant issue, if you’re even slightly worried about your engine, using it does give an extra layer of protection.

10W 30 and 5W 30 would be the more ideal substitute over SAE 30 since they operate the same way at the temperature lawn mowers, and other air cooled engines, operate at.

The also cool to a thinner viscosity, making them more ideal for cooler climates or environments.

With all of this information in mind, remember that if you’re ever unsure what kind of oil to use in your lawn mower or other engine, go with whatever is listed in the user manual.

The manufacturer may suggest oil that is more expensive, but it should also work perfectly with whatever you’re putting it in. Different oils within the same range shouldn’t hurt your engine, but that doesn’t mean that they can’t.